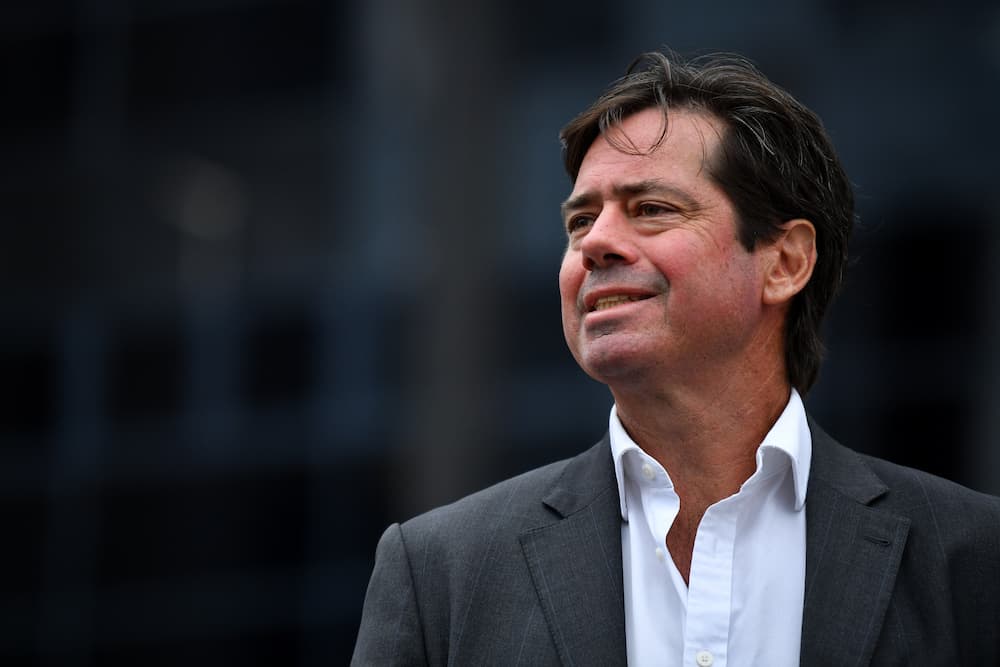 Gillon McLachlan plans to go out swinging, setting an ambitious agenda for his last few months as AFL chief executive.

McLachlan choked up on Tuesday as he announced he would leave the role at the end of the season.

With his wife Laura and their four children looking on, McLachlan spoke emotionally of his eight years in one of Australian sport’s most powerful roles and said the game is in “incredible shape”.

The 49-year-old plans to put an exclamation point to his 22 years at the AFL, completing a new broadcast rights deal as well as collective bargaining agreements for the men and women, confirming whether Tasmania will be awarded the 19th AFL licence and settling a new funding model for clubs.

“The reality is there are four or five huge things to get done this year,” McLachlan said.

He then became emotional and had to pause as he reflected on his time in the AFL.

“It’s an honour and a privilege to serve this game, the best game in the world,” he said.

“The responsibility has never been lost on me. I feel good that the game is in better shape now than when I took over.

“I’m leaving now because it feels right – right for the AFL, right for my family.

“It’s clearly more complicated than that, but in simple terms, actually, it’s not.

“I hope you take it the right way, (the AFL) is in incredible shape, on whatever metric you assess it.”

McLachlan was appointed to replace Andrew Demetriou as CEO in April 2014.

There had been speculation that he would stand down during the past couple of years, but he resolved to stay on as the sport negotiated the huge challenges presented by the COVID-19 pandemic.

Among the most significant achievements during McLachlan’s time at the helm was the introduction of the AFLW competition, which will expand again to 18 teams for the seventh season beginning later this year.

He informed AFL chair Richard Goyder as they flew to Adelaide for the weekend’s AFLW grand final of his decision to step aside.

“From my point of view and the Commission’s point of view it would be correct to say that we’re not happy with that decision but we are completely supportive of it, if you get that sense,” Goyder said.

“Gill has always said to me that he wanted to go at the top of his game, at the time of his choosing and when the AFL was in as good a shape as it can be.

Goyder praised McLachlan for his “ability to see around corners” in the last couple of years as COVID-19 posed unprecedented challenges.

The South Australian joined the AFL in May 2000.

Richmond CEO Brendon Gale — who has has overseen the Tigers’ recent period of dominance including premierships in 2017, 2019 and 2020 — and highly-rated AFL executive member Travis Auld are likely to be among the early favourites to replace McLachlan.