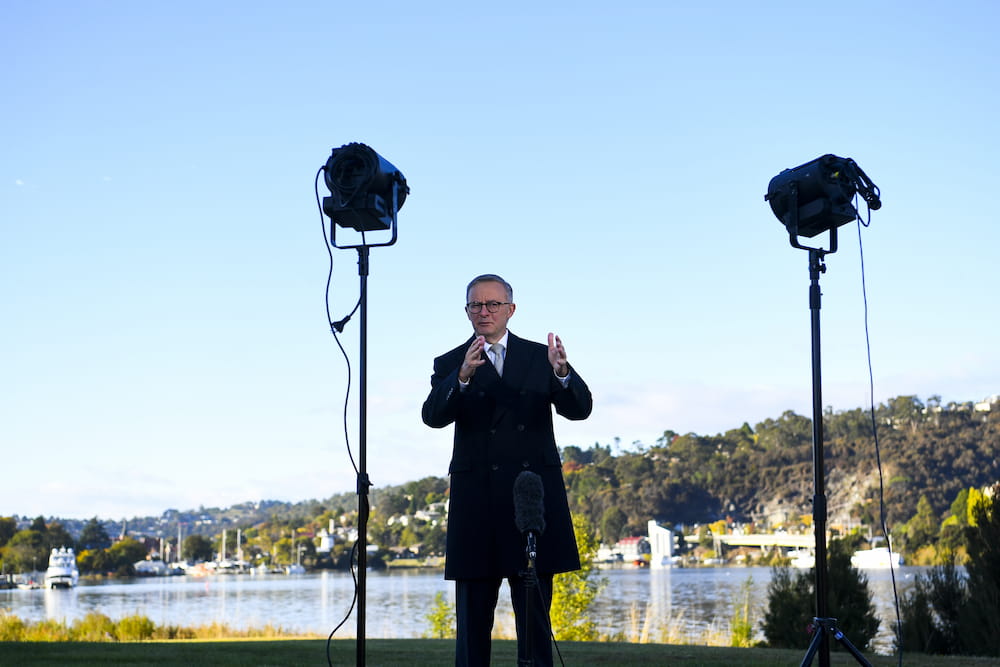 Opposition Leader Anthony Albanese has stumbled through his opening press conference on the first full day of election campaigning, being unable to name the official interest rate or national unemployment figures.

Mr Albanese was campaigning in the seat of Bass in northern Tasmania, one of the most marginal seats in the country, where he outlined funding for care for children with hearing loss.

However, when asked in a press conference about the official interest rate and the national unemployment figures, he was unable to answer.

“The national unemployment rate at the moment is, I think it’s 5.4 (per cent), sorry, I’m not sure what it is,” he told reporters in Launceston.

The latest unemployment figure is four per cent, while the official interest rate is 0.1 per cent and has not changed since November 2020.

Labor’s campaign spokeswoman, Senator Katy Gallagher, did provide the correct figures when asked moments after the Opposition leader was questioned.

Earlier, Mr Albanese attempted to sidestep the question when asked by reporters.

“We can do the old Q and A stuff over 50 different figures,” he said.

“The truth is that … the Reserve Bank have said that there’ll be multiple interest rate increases, regardless of who’s in government.”

Meanwhile, Prime Minister Scott Morrison is campaigning in Gilmore on the NSW south coast, where he has been attempting to spruik the government’s economic credentials.

Despite being behind in the polls for much of the parliamentary term, Mr Morrison said the coalition’s results spoke for themselves.

“The character of our government has been proven in the results we’ve achieved, coming through this pandemic saving thousands of lives,” he told the Nine Network on Monday.

“Not everybody agrees with everything I’ve done, and not everybody will necessarily like me, but what they will know is that when we faced this crisis, we ploughed through with the right plan.”

Mr Morrison will start the day campaigning at a cannery in Gilmore alongside the Liberal candidate Andrew Constance, the former NSW transport minister.

It comes as the latest Newspoll shows the coalition narrowing the gap with Labor on two-party preferred, but the opposition are still ahead 53-47.

Mr Morrison has also pulled ahead of Mr Albanese as preferred prime minister.

The prime minister confirmed Alan Tudge, who stepped aside from cabinet amid allegations he had an abusive relationship with a former staffer with whom he had an affair, would return to the frontbench should the government win the election.

Mr Tudge has strenuously denied the allegation, and an investigation found insufficient evidence he breached the ministerial standards.

Mr Morrison said Mr Tudge had stood aside for “health and family reasons” and was welcome to rejoin cabinet when he was ready.