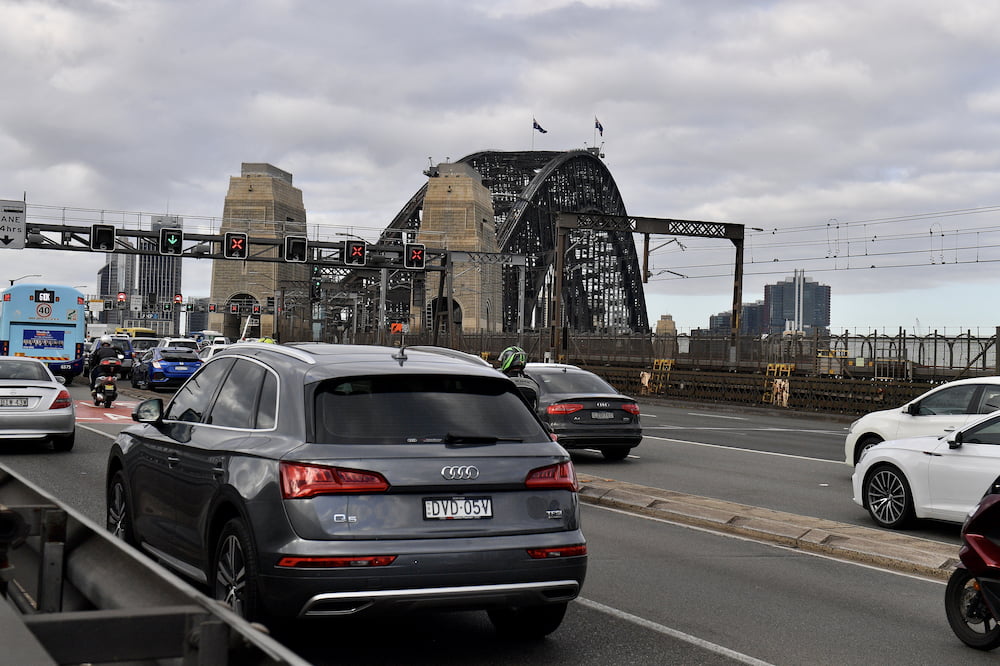 A rural firefighter is among a group of climate change activists arrested over a protest on the Sydney Harbour Bridge that disrupted peak-hour traffic.

NSW Police urged drivers to avoid the area on Wednesday morning after the group parked a truck on the Cahill Expressway about 8.30am, blocking near the south pylon, over Circular Quay and The Rocks.

Two of the group climbed onto the truck’s cabin, holding a Fireproof Australia flag and lighting a flare, while another two glued themselves to the bridge.

Police moved in on the group, arresting the four at 9am and taking them to the nearby Day Street Police Station, where they are in the process of being charged.

Fireproof Australia has vowed to continue demonstrating, despite increased police powers that recently passed in parliament to crack down on disruptive protests.

A spokeswoman for Fireproof Australia told AAP one of the protesters – who she named as Alan – had been a firefighter in the Hunter Valley Rural Fire Service for 40 years.

The action comes just days after another member of Fireproof Australia ran onto the pitch with a lit flare during an NRL match between the Cronulla Sharks and the Wests Tigers on Sunday.

The 32-year-old pleaded guilty at Sutherland Local Court on Monday to two charges of entering enclosed land without lawful excuse and was sentenced to three months in prison for possessing a bright light distress signal in a public place.

Fireproof Australia is calling for the rehoming of flood and bushfire survivors, and the implementation of recommendations from the royal commission into the Black Summer bushfires.

The group has recently held multiple high-profile protests targeted at disrupting traffic and the movement of infrastructure, attracting the ire of the NSW government.

The recently introduced laws could lead to protesters facing fines of $22,000 and up to two years in prison.