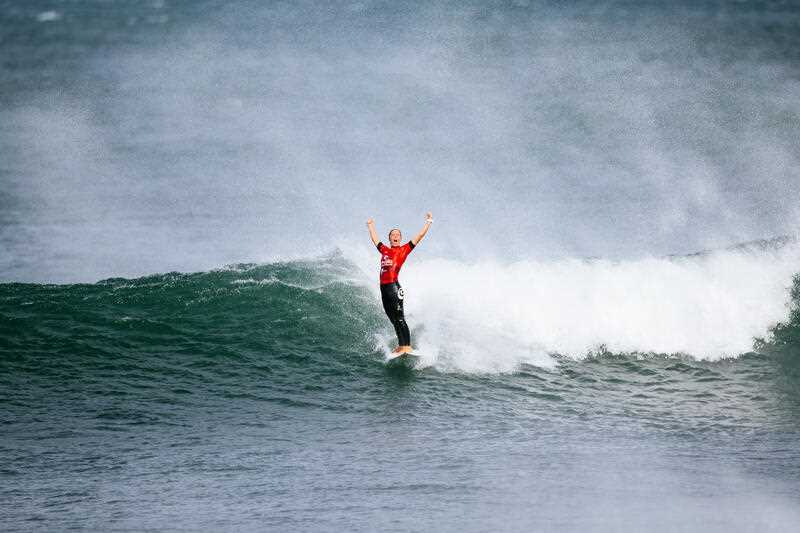 Two-time world champion Tyler Wright has fought back tears after busting through years of health struggles to finally win at Bells Beach.

Wright missed half of 2018 and almost all of 2019 after being struck down by an illness that was later diagnosed as post-viral syndrome.

The health struggles still continue to this day, with Wright battling through the pain barrier during her semi-final showdown against Courtney Conlogue.

“It’s been a long journey. There’s a big difference between people thinking I’m back and me feeling I’m back,” Wright said during an emotional interview after ringing the iconic bell.

“I got obliterated. It was tough. I haven’t really felt like myself in the water.

“It’s been hard. There’s been so many times I wanted to give up on getting back to this sort of form. It’s taken all of me. It’s unbelievable.

“I do want to say a special thank you to Brett Jarosz. He helped me through my illness.

“He figured out the whole situation. Without him I wouldn’t have been able to put a jersey back on.”

Wright was brimming with joy as she caught a wave in to celebrate the title win, and she was chaired out of the ocean by her brothers Owen and Mikey Wright.

Just making it to the final was no easy feat for Wright.

The two-time world champion edged past three-time Bells winner Conlogue 14.23 to 13.90 in a tense semi-final showdown.

Wright needed to dig deep physically to pull off that win, and she was in so much pain afterwards that she needed to step aside for a while to recover.

“I call it the edge. It’s essentially when my heart rate and my fight or flight gets so peaked so quickly,” Wright said.

“Essentially my ovaries start to cramp up and everything in me is just pain.

“That heart rate spike was pretty hectic (today) due to how I had to surf back into the heat.

“At the end there my ovaries there were pretty killer, and I had to take a minute to walk it out for sure.”

Wright thanked the people who supported her through her health challenges, and said Bells Beach was her most special event win.

“It’s the only event I’ve ever really wanted to win. Here I am. I’m pretty over the moon,” she said.

“Two years being out (with health problems) is a long time. The last few years I haven’t really felt like I’ve been surfing like myself.

“The last couple of months it’s been coming back in little glimpses. That fire that got stuffed out by illness is relit.”

The result shot Wright up to second in the world ahead of the Margaret River Pro in Western Australia.