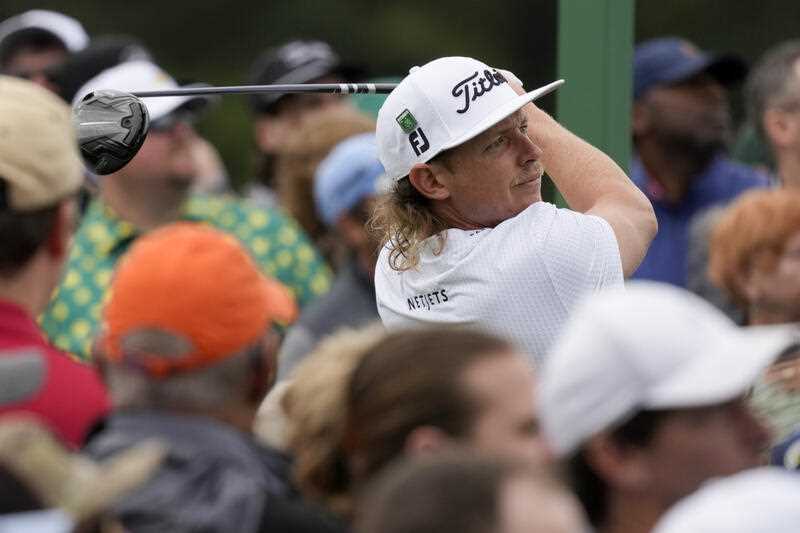 Cameron Smith has continued his hot form to capture the clubhouse lead with a birdie-filled first round at the Masters in Augusta, Georgia.

Smith played majestically in blustery winds at Augusta National to card a four-under-par 68 on Thursday that could have been anything if not for two double-bogeys that bookended his round.

Smith shrugged off his first double on the opening hole to rattle in eight birdies to open up a two-shot buffer teeing off on the 18th.

Alas, Australia’s world No.6 finished his round as he started with a six on the par-4 last after slicing his drive into the trees and then three-putting.

When he signed off, Smith was sharing the lead with Sungjae Im, the Korean who finished joint runner-up with Smith in 2020 behind Dustin Johnson.

Rain delayed Smith’s round by half an hour but nothing could stop him from picking up from where he left off in winning last month’s Players Championship in Florida.

The Queenslander hadn’t played competitively since bagging a record 10 birdies in the final round at TPC Sawgrass.

He arrived at Augusta National among the favourites and full of confidence.

Not even his sloppy six on the par-4 opener, after he found a fairway bunker off the tee, then missed a seven-foot putt for bogey, could shake the 28-year-old’s belief.

After a scrambling par on the second, Smith made his first birdie on the fifth, then picked up further shots on six, eight and nine to reach the turn at two under.

When he birdied the treacherous par-3 12th as well over the water on Amen Corner, sinking an 11-footer, Smith found himself joint leader with Im.

But Smith quickly shot two shots clear with a hat-trick of birdies on 14, 15 and 16 – only to falter at the last.

Among Australia’s other morning starters, Masters debutant Min Woo Lee had a rollercoaster round of one-over 73 featuring five birdies, four bogeys and a double.

Still on the course, fellow Masters rookie Lucas Herbert was even par through 10 holes, with 2013 champion Adam Scott one over after 16 holes.

Marc Leishman and Cam Davis were also two over playing the back nine.