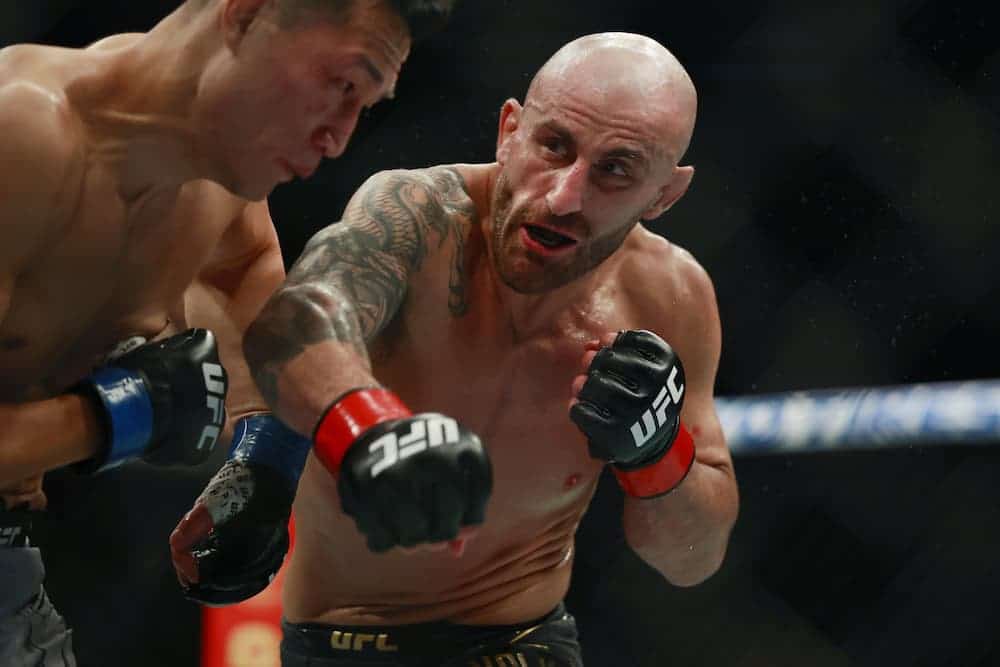 Australia’s Alexander Volkanovski wants to convince UFC boss Dana White to give him a title defence in Australia and could consider moving up to lightweight after successfully defending his featherweight crown for a third time.

Volkanovski’s speed and variety proved too much for South Korea’s Chan Sung Jung – aka The Korean Zombie – as he earned a dominant fourth-round stoppage in Jacksonville, Florida on Sunday (AEST).

He floored the challenger in the last 15 seconds of the third round with a big right hand punch.

He landed a couple more right hands early in the fourth round, prompting referee Herb Dean to halt the fight.

“All week I said I’m on another level right now. I can’t be stopped and I just showed youse,” Volkanovski said after extending his UFC record to 11-0.

The 33-year-old from Windang on the NSW South Coast has an overall 24-1 record in MMA combat, having won 21 straight since his only loss in May 2013.

Volkanovski hasn’t fought in Australia since February, 2018, having his last seven bouts overseas.

White said the UFC wasn’t looking at bringing a promotion to Australia this year, but seemed confused about the COVID situation in Australia.

“The place is still locked down. I can’t risk trying to bring a show over there, get there and have it shut down,” White said.

Volkanovski said he would talk to White.

“I want to defend my belt in Australia, things are getting good back home, I think they could get it over the line,” Volkanovski said.

“Let me defend my belt in Australia, I think I deserve that.

“We’ve got big boxing fights, everything’s happening in Australia. Why can’t the UFC be there?”

White was impressed by Volkanovski’s performance, which earned organisation and fan bonuses and said he merited hs spot amongst the UFC’s best pound-for-pound fighters, in which he is currently ranked No.3.

‘He couldn’t look better than he looked tonight. He looked incredible,” White said.

The South Korean stepped in for Max Holloway, who Volkanovski had already beaten twice in title fights before he pulled out with an injury this time.

Volkanovski said that was probably still the biggest fight for him at featherweight, but he was levels above the contenders and was eyeing a move up to lightweight where champion Charles Oliveira will defend the title next month.

“If this (featherweight) division don’t want to sort itself out and they are all going to sit back and wait for s..t then I”ll move up and fight lightweight,” Volkanovski said.

‘I’m an easy chimp to understand, take the number one spot you get that shot, if not let’s move up.

“I think we’re in a good position to maybe move up, let’s see what happens in this lightweight division title fight.

“Volk is coming for everyone, so lightweight division watch out.”

The fourth-ranked Korean Zombie, had gone a UFC record 3171 days between title bouts.

‘I was ready to go too but it felt like I hit a wall that I could not go over,’ he said.

In the co-main event, Aljamain Sterling retained the bantamweight title with a split decision points win over interim champion Petr Yan, who he took the title off through disqualification in their first meeting.