Dockers kick away late to down GWS 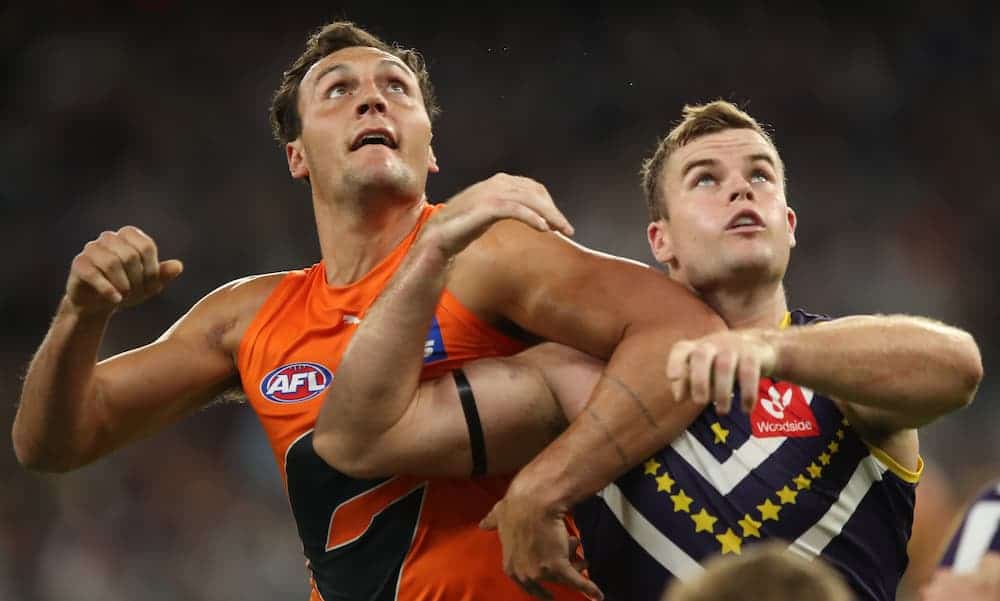 Fremantle have overcome Jesse Hogan’s hot start and an all too familiar case of the goalkicking wobbles to post a 34-point AFL win over GWS at Optus Stadium.

Hogan, playing his first game in Perth since being traded from Fremantle to the Giants at the end of 2020, booted two goals in the first half of Saturday night’s match to keep his side in touch.

Hogan didn’t tally a kick in the second half, finishing the match with two goals from nine disposals.

Dockers recruit Will Brodie tallied a career-high 36 disposals to go with his six clearances, while Andrew Brayshaw broke a tight tag from Lachie Ash to finish with 26 possessions and a clutch banana goal when the game was on the line in the last quarter.

Brennan Cox and late inclusion Griffin Logue were rocks in defence, while third-gamer Nathan O’Driscoll booted 2.2 from 20 disposals to show he is a star on the rise.

Fremantle were deserved winners of the match, but the 42-16 free-kick count in their favour is sure to raise eyebrows.

Tim Taranto collected a team-high 31 disposals for the Giants, while Tom Green was electric with two brilliant goals and six clearances from 17 possessions.

Giants ruckman Braydon Preuss could find himself in strife for elbowing David Mundy in the back of the head.

Preuss had just taken a mark when he swung his bent arm backwards in a bid to get Mundy to release him.

Dockers forward Michael Walters could cop a fine for pushing an opponent into an umpire during a scuffle on the three quarter-time siren.

Fremantle were dealt a late blow when defender Alex Pearce was ruled out just before the bounce with the ankle injury he suffered last week.

It meant undersized defender Luke Ryan was given the tough job of stopping Hogan early on, and the GWS forward made the most of the size mismatch by booting his two goals from powerful marks.

Fremantle’s inaccuracy proved costly early, but O’Driscoll provided a special moment when he kissed his black armband and pointed to the sky in a tribute to his late grandmother after kicking his first goal of the night.

Green lit up the third quarter for GWS with two spectacular goals.

The first was a great snap in congestion after selling the dummy to Mundy.

The second was a quick-thinking checkside goal, and he accidentally sparked a melee when his fist-pump celebration struck opponent Heath Chapman.

The game appeared headed for an epic finale, but any hopes of a close finish were put to bed as the Dockers rammed through six unanswered goals in a mesmerising blitz.

The post Dockers kick away late to down GWS appeared first on Canberra Weekly.