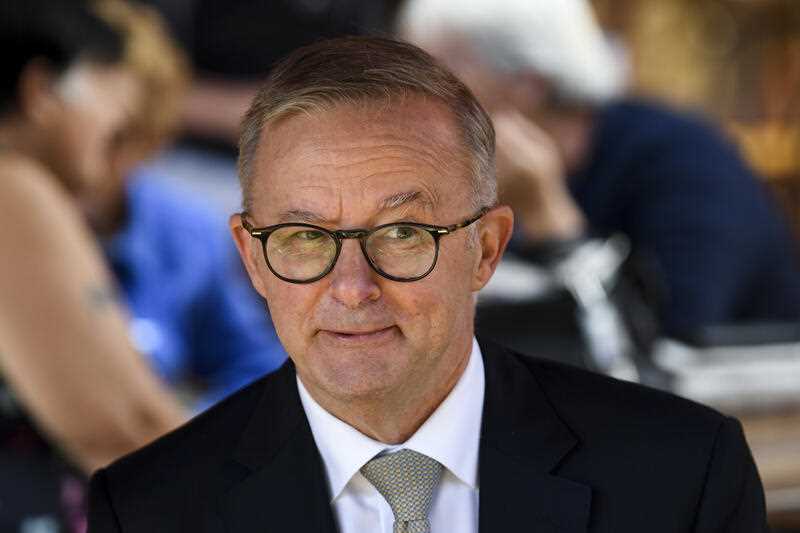 Surrounded by tin cans, the prime minister kicked off his bid for re-election focused on manufacturing, but day two will be all about creating jobs.

Scott Morrison will be in Sydney on Tuesday peddling an election promise to create 1.3 million new jobs in the next five years.

The jobs pledge will be fulfilled by investing in the infrastructure, manufacturing and digital sectors to create more opportunities for workers.

If elected, an Albanese government would reinstate a 50 per cent regional loading for bulk-billed telehealth psychiatric consultations.

The commitment is expected to cost more than $31 million over four years, and support 450,000 consultations during that period – or more than 1.4 million appointments over 10 years.

During a visit to a canning company in regional NSW on Monday, Mr Morrison pressed the start button on a special election label and watched as hundreds of blue cans saying “Scomo’s Strong Economy” rolled off the conveyor belt.

But it wasn’t all happy snaps as a group of locals wearing Hawaiian shirts and carrying ukuleles made their feelings about the prime minister clear.

“Be fair dinkum. If you’re going to take the credit for things, start to do action,” Vincentia resident Bob said.

Mr Albanese will be trying to put day one of the campaign behind him after he was unable to answer questions on what the cash rate or national unemployment rates were during a media conference in Launceston.

But former prime minister John Howard didn’t see what the fuss was about.

“Anthony Albanese didn’t know the unemployment rate? So what?” he said while campaigning with Indigenous Affairs Minister Ken Wyatt in WA.

Mr Albanese later owned up to the gaffe, saying he was happy to “fess up” to his mistakes.

Mr Morrison’s own unemployment rate slip in mid-March, which attracted a lot less media attention at the time, has since resurfaced.

The prime minister wrongly stated the unemployment figure at the time was 4.3 per cent, with his office forced to correct the rate – which sat at 4.2 per cent – in the transcript it later put out.

By Maeve Bannister in Canberra, AAP