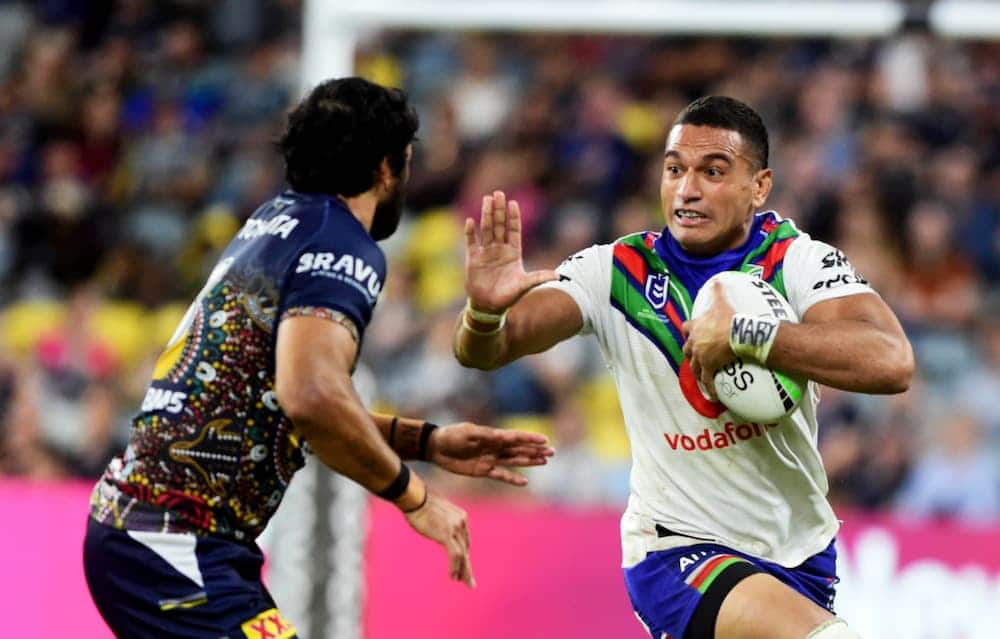 Warriors winger Marcelo Montoya has received a four-game NRL suspension for the on-field use of a homophobic slur.

Montoya received the suspension at the NRL judiciary after referring to North Queensland winger Kyle Feldt as a “fa***t”.

While Feldt lay on the ground awaiting treatment during the Warriors’ 25-24 win on Friday, Montoya yelled: “Get up Kyle, you fa***t”.

Montoya, who appeared via video link from the club’s Redcliffe base on Tuesday, had pleaded guilty to the contrary conduct charge.

The winger expressed remorse for the incident in front of the judiciary panel of chair Geoff Bellew and former players Tony Puletua and Bob Lindner.

“I am not a homophobe and gays in the community are valued, that’s my position,” Montoya said.

“In the heat of the moment on the footy field things are said.

“I accept that word is unacceptable and that’s definitely something out of character.

“There was no intention to offend anyone or Kyle.”

Montoya telephoned coach Nathan Brown on Saturday where he admitted to using the term before the Warriors released a statement on Sunday condemning Montoya’s comments.

Warriors chief executive Cameron George appeared via video link from New Zealand where he spoke of Montoya’s standing at the club and his charity work.

He described the Fijian international as a “true gentleman”.

Montoya’s lawyer James McLeod attempted to paint the picture of a well-behaved player, alluding to the winger’s clean record at the NRL judiciary.

He argued Montoya should receive a three-game suspension with a one-week reduction given the winger came forward and gave an early guilty plea.

But NRL counsel Lachlan Gyles made the case that Montoya’s comments were not in the spirit of a game which has historically been “inclusive and egalitarian in nature”.

Gyles argued that Montoya should receive six weeks but said there should be a discount of two weeks for his remorse, an early guilty plea and clean record.

“It’s a derogatory term which can promote discrimination and hatred of gay men,” Gyles said.

“The use of that term is unacceptable in modern society and everyone connected with the game has the right to feel safe and protected.”

Those factors were all considered by Puletua and Lindner who unanimously agreed to a four-game ban.

Montoya will not return for the Warriors until their game against South Sydney on May 14.