Nick Kyrgios bows out with another US tournament meltdown 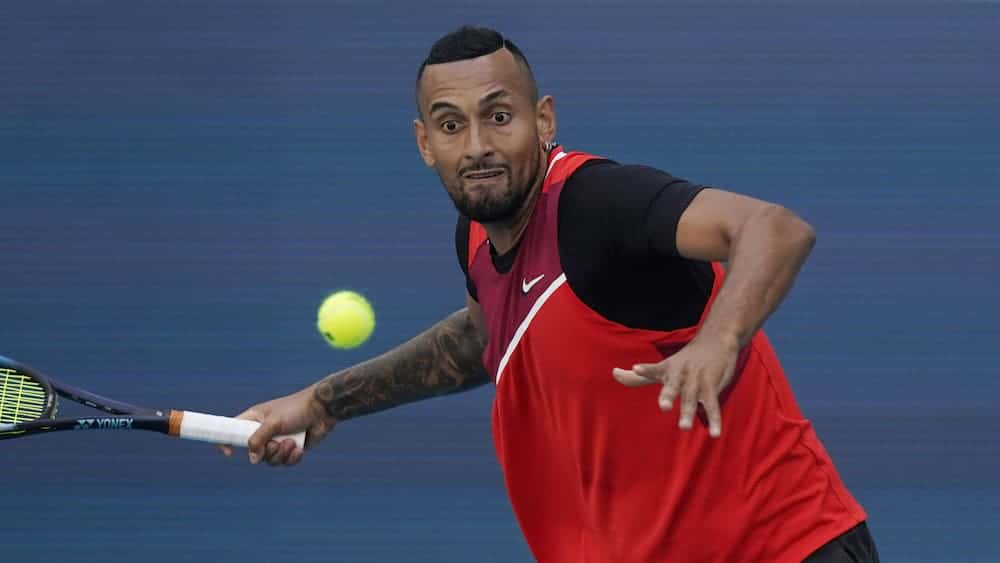 Nick Kyrgios has blown a gasket again, bowing out of a third successive US tournament in ugly meltdown mode.

The maverick Australian was fined a total of $A80,000 after losing in Indian Wells and Miami and could face a further financial penalty after getting knocked out of the US Men’s Clay Court Championship in Houston while spouting obscenities and rowing with the umpire.

Kyrgios ended up losing his cool in his semi-final on Saturday and was penalised a point for a second audible obscenity, which cost him a crucial game late in the second set of his 6-3 7-5 loss to giant American Reilly Opelka.

Kyrgios may have had some justification for his rants after umpire Joshua Brace admitted he’d made a mistake with a call at 5-5 in the second set.

But after the key point, which left the score at 30-30, Kyrgios completely lost the plot, losing the next point with a distracted error and, after earning his second warning for more on-court swearing, getting docked the point which cost him the game at break point down.

He was lucky not to earn another, potentially game and match-losing penalty as he continued to scream out loud “F***!” as he walked back to his seat for the changeover.

There, Kyrgios continued to harangue the official, muttering: “F***** out! How are you not calling it? It’s an absolute joke.”

During the exchange, the clearly flustered Brace admitted: “I believe it now, I made a mistake.”

Another meltdown from Nick Kyrgios at an umpire. It’s getting ridiculous. The ATP has let this go on for far too long. It’s not just Kyrgios and there’s always been scenes like this but they’re so common now, it’s a blight on the sport. #Tennis #ATPpic.twitter.com/SD0se9o4zA

It wasn’t the first debate the pair had had over the incident, which happened when Opelka’s return at 30-15 had appeared to go over the baseline but wasn’t called out as Kyrgios went on to lose the point.

“If it is out, then I did miss it,” said the umpire, leaving Kyrgios to tell him sarcastically: “Well, congratulations…”

Kyrgios, who’s otherwise had a fine US swing beyond these racquet-chucking and umpire-berating sideshows, had been battling superbly on his least favourite clay surface to get back into the match against the huge-serving, 211cm-tall Opelka.

Trying to reach his first ATP final since Washington in 2019, Kyrgios had earlier appeared quite out of sorts , muttering loudly to himself at one changeover: “F***** energy is useless this morning! Useless!”

Opelka had dropped only four points on serve in the opening set and when Kyrgios got broken again midway through the second there seemed no way back.

The Australian then found some of his best form to break serve and edge momentum his way until his meltdown.

Third-seeded Opelka, remaining perfectly calm amid all the nonsense, stepped up at 6-5, served three aces and sealed the win in 69 minutes, earning a place in the final against fellow US giant John Isner.

When it was all over, Kyrgios still couldn’t let it go. “Do you feel bad?” he asked Brace. “I don’t think you feel bad.”

Opelka leads Isner 4-1 head-to-head, with four victories in a row.

“When guys like Reilly and I lock horns, it’s going to be tiebreakers,” Isner said.

The last 12 sets they have contested all went to tiebreakers, including one Isner called “ridiculous” on Saturday.

That’s because it went to 24-22 in the semifinals at Dallas in February — the longest tiebreaker in an ATP match since 1990.

The post Nick Kyrgios bows out with another US tournament meltdown appeared first on Canberra Weekly.