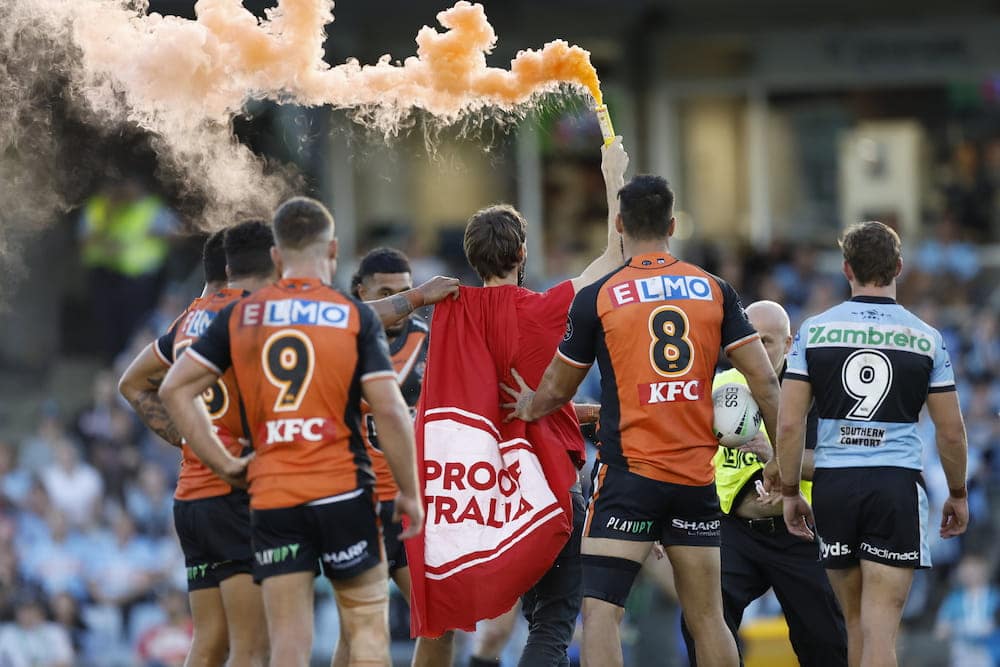 A protester who ran on to the field with a flare during an NRL match between the Cronulla Sharks and Wests Tigers in Sydney has been jailed for three months.

It was one of multiple pitch invasions during round five of the NRL season, with other spectators also running on to Cronulla’s Shark Park on Sunday.

Unlike the woman crash tackled by security after running through an NRL game at Parramatta on Saturday night would later claim, Andrew George was not crossing something off his “bucket list”.

The 32-year-old was “embracing the larrikin spirit … defying authority when authority needs to be defied”, he said in a statement recorded before he lit an orange flare as he ran on the field.

He pleaded guilty to two charges in Sutherland Local Court on Monday.

George was fined $440 for entering enclosed land without lawful excuse and sentenced to three months in prison for possessing a bright light distress signal in a public place.

It was the latest action from the protest group Fireproof Australia.

The group is demanding the immediate rehousing of flood and bushfire survivors, the implementation of recommendations from the royal commission into the Black Summer bushfires, and for schools, aged care and disability facilities to be made “smoke-proof”.

The pitch invasion was a change in tactics for the group, which has previously blocked traffic on roads and bridges to draw attention to their cause.

NSW recently passed new laws that could see those protests result in fines up to $22,000 and up to two years in prison.

Shortly after, Fireproof Australia were back blocking roads, vowing to defy the new laws while Premier Dominic Perrottet called for courts to “throw the book” at them.

On Friday, Fireproof Australia claimed a victory, even while more protesters were being arrested, saying Mr Perrottet “agrees with our demands” to rehome people who have lost their houses in floods.

Mr Perrottet and other senior members of his government have repeatedly said housing is the priority for the NSW flood recovery since early March.