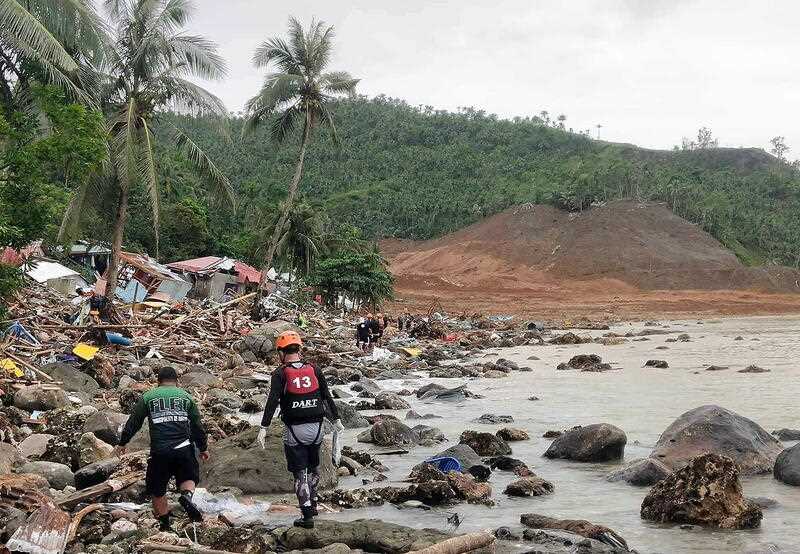 The death toll from landslides and floods caused by this year’s first tropical storm in the Philippines has risen to at least 172, with 110 people still missing.

Of the victims, 156 were from Leyte province, some 600 kilometres southeast of Manila, where landslides devastated communities in Baybay City and Abuyog town.

At least 104 people were still missing in the two areas, the agency said.

In other affected areas, 16 people were killed mostly in floods caused by tropical storm Megi – known locally as Agaton – which slammed into the country on April 10.

More than two million people in 30 provinces were affected by the storm, which forced more than 207,500 residents to flee their homes and stay in evacuation centres.

Damage to agriculture, houses and public infrastructure was estimated at more than 257 million pesos ($A6.8 million), the agency said.

Efforts to search for the missing were continuing despite concerns over the safety of rescuers in the landslide areas, Mark Timbal, a spokesman for the national disaster agency, said.

“So far, our search and rescue teams did not stop their operations,” he told DZBB radio station in Manila.

“More than 300 search and rescue personnel have been deployed to help the victims.”

Timbal urged those who wish to send donations to co-ordinate with local government units to properly distribute the relief supplies.

“Usually, we need food, water, blankets, and hygiene equipment for those affected,” he said.

The Philippine archipelago is hit by an average of 20 tropical cyclones every year.