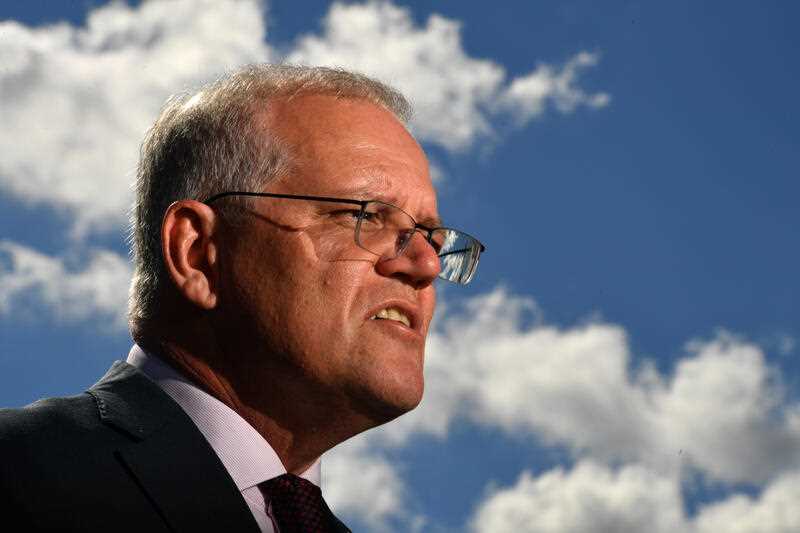 Prime Minister Scott Morrison has started the second week of the election campaign in WA, pledging to boost defence jobs as he promotes his economic plan.

Mr Morrison is set to announce $124 million for two extra navy patrol boats to be built at the Henderson shipyards.

He will spend two days in WA before heading to Brisbane for the first leaders’ debate with Anthony Albanese.

The Labor leader starts his day in Brisbane, meeting victims of the recent floods, after dropping in to the Byron Bay Bluesfest on Sunday night to introduce rock legend Jimmy Barnes on stage.

Mr Albanese was booed and cheered simultaneously as he announced support to expand the reach of radio station Double J into the bush.

Mr Morrison will also use his WA trip to talk up a coalition plan to get more people into home ownership.

First time homeowners unable to put together the minimum 20 per cent deposit themselves will from July 1 be able to secure a government-funded guarantee to homes valued at up to $150,000 more than the current cap.

Meanwhile, new polling shows Mr Morrison ahead as the choice for preferred prime minister with 38 per cent, against 30 per cent for Mr Albanese, a sharp turnaround on the Labor leader’s 37-36 margin of two weeks ago.

The Resolve Strategic poll for The Sydney Morning Herald-The Age also showed Labor’s primary vote down four points to 34 per cent, with the coalition up one to 35 per cent.

Asked whether gaffes by her leader had impacted on the party’s standing, Labor frontbencher Tanya Plibersek said voters were more interested in their cost of living than mistakes made by politicians.

“It is not a test of memory, it is a test of leadership and Anthony shows leadership every day,” she told the Seven Network.

“I have made mistakes in press conferences … the difference is whether you stand up and take responsibility and correct the record as quickly as possible and then get on with what actually matters to Australians.”

“Running a country, you don’t have to be popular,” he said.

“It is not about going to the Bluesfest and getting booed, or meeting surfers at Bells Beach … (you’re) missing the idea that it is actually the hard job of running the nation.”

Labor pounced on Mr Morrison’s choice, pointing to old comments by Senator Ruston where she said Medicare was “not sustainable”, with Mr Albanese warning of possible cuts to the scheme.

Senator Ruston said her comments dated back to 2014 and the government had been “clear” since that it would not be making funding cuts to Medicare.

“We absolutely have guaranteed Medicare in law,” she told ABC Radio on Monday.

Australian Medical Association vice-president Chris Mooy said it was unfortunate the major political parties were offering “superficial” health policy and slinging dirt at each other.

“Primary care needs sorting out so people can get the care and the time they need,” he said.

By Finbar O’Mallon and Paul Osborne in Canberra, AAP