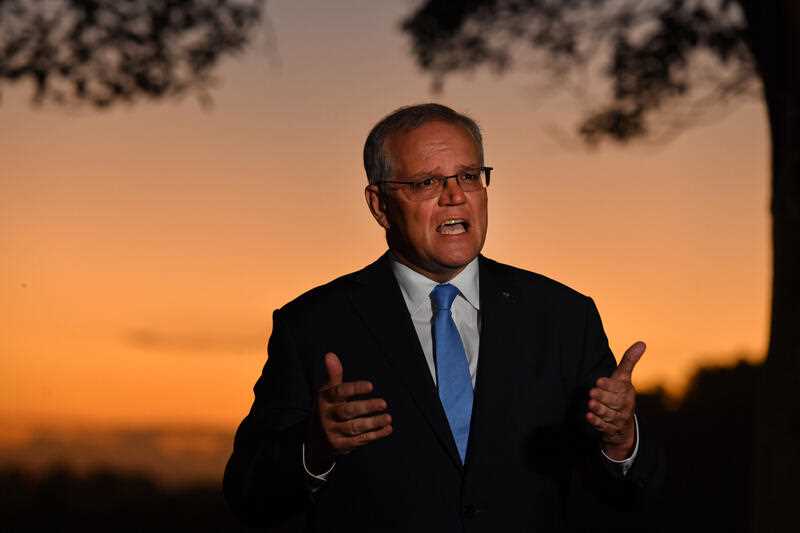 Prime Minister Scott Morrison has started his re-election bid along the NSW South Coast while Opposition Leader Anthony Albanese has touched down in Tasmania.

Mr Morrison flew to Nowra on Sunday afternoon after announcing the election in Canberra, targeting the marginal seat of Gilmore which is held by Labor on a slim 2.6 per cent margin.

The region was one of the hardest hit by the Black Summer bushfires in 2019/20, with recovery then stalled due to the pandemic.

Former NSW minister Andrew Constance – who attracted national attention for his response during the fires – is hoping to win the seat back for the Liberals off Fiona Phillips.

Mr Morrison will announce $40 million worth of local road upgrades across the Shoalhaven region as he sells his government’s economic credentials.

“Australia’s economic recovery is leading the world, and investments like this, right here in the Shoalhaven, will keep creating local jobs and drive our record low unemployment rate down,” he said.

Meanwhile, Mr Albanese took his travelling contingent to Tasmania after the starting gun was fired as he prepares to campaign in the Liberal-held seat of Bass, spruiking Labor’s mantra of a better future.

Bass is held on a 0.4 per cent margin by outspoken backbencher Bridget Archer, who crossed the floor against the government over a federal integrity commission and is one of the moderates who spoke out against parts of the government’s religious discrimination bill.

Labor will use the first full day of the campaign to announce better care for children with hearing loss, pledging $1.5 million to fund the development of the digital HearHub platform, an online service that will deliver hearing tests and support for families.

It will also establish two new Shepherd Centres, which run the platform, in Launceston and Hobart with $2.5 million of funding behind them.

“A Labor government will ensure our kids are looked after, whether through digital or on-the-ground support services. No child will be left behind.”

The deputy prime minister is also in the regions, announcing the opening of a major infrastructure project in northern Victoria, around an hour outside of Shepparton.

Barnaby Joyce says the opening of the Echuca-Moama river crossing will transform the local economy and deliver a significant boost to the freight industry.

The bridge connects the Murray Valley Highway in Echuca, Victoria, with the Cobb Highway in Moama, NSW.

“The new crossing over the Campaspe and Murray rivers will improve traffic flow and slash operating costs for the freight industry by supporting heavy and oversize vehicles restricted from using the existing Murray River Bridge,” Mr Joyce said.

“Projects like this will drive our economy into the future by supporting the industries that produce and sell the products that make our nation wealthier and stronger.”

The latest Newspoll indicates Mr Morrison has pulled ahead of Mr Albanese as preferred prime minister but Labor remains in poll position despite a further fall in popular support.

The Newspoll conducted for The Australian shows Labor’s primary vote has dropped a point to 37 per cent on top of a three-point fall last week.

The coalition’s primary vote remains unchanged on a low 36 per cent.

The shift in underlying support for Labor has resulted in a one-point gain for the coalition on a two-party-preferred basis with Labor ahead 53-47.

Mr Morrison has pulled ahead of the Labor leader as the better prime minister, the Newspoll shows.

Mr Albanese fell three points to 39 per cent while Mr Morrison rose a point to 44 per cent.

The Greens remain unchanged on 10 per cent, with One Nation level on 3 per cent, Clive Palmer’s United Australia Party lifting a point to 4 per cent and “others” recording 10 per cent for the third poll in a row.

By Dominic Giannini in Canberra, AAP