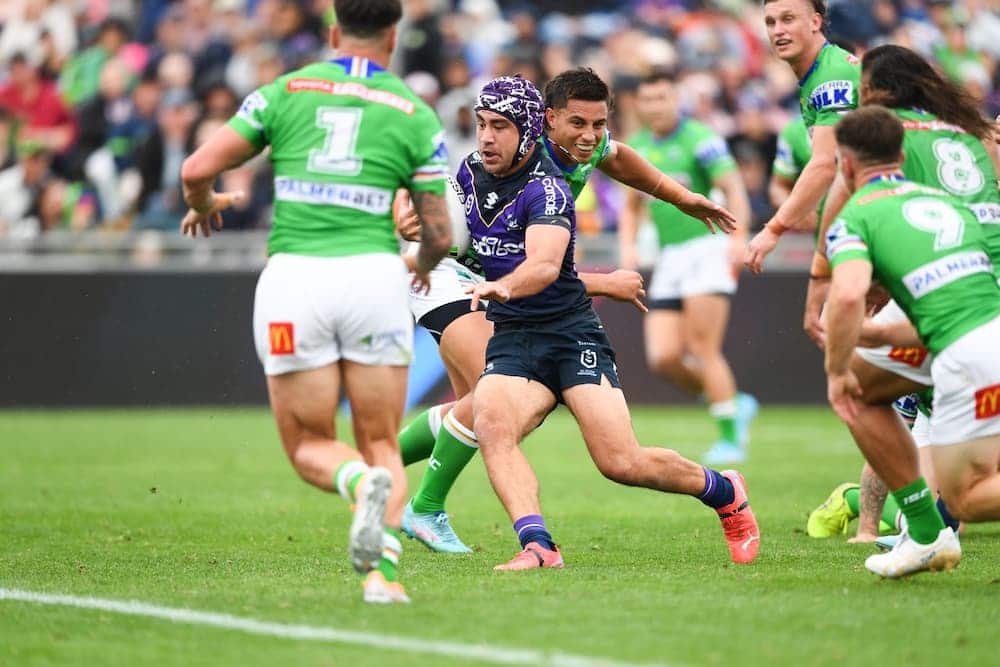 Frustrated Canberra coach Ricky Stuart says his players won’t start enjoying their football until they can consistently put opposition teams under pressure as the mistake-ridden Raiders crashed to a 30-16 loss to Melbourne.

The Storm capitalised with two tries from Jahrome Hughes and a classy performance from Harry Grant in Wagga Wagga, with fellow superstars Cameron Munster and Ryan Papenhuyzen also in hot form.

But the Raiders again had themselves to blame with 14 mistakes for the game, and they now lead the league with 54 errors through five matches.

Stuart said results wouldn’t change until his side improved its efficiency.

“It’s a frustrating time for us at the moment because we’re just not putting any team under any pressure,” he said.

“I feel for the boys because I see how close we are and as I just said to them, you’re allowed to enjoy your football.

“But they’re not enjoying their football at the moment because you’re not putting teams under pressure … until we do, we’re not going to enjoy our football.

“At times it’s execution, other times it’s bad luck … we’re not going to grow and develop into the team we should be.”

But Stuart foreshadowed he would resist calls to swing the axe and would back in his players to click into gear soon.

“The so-called experts are into me all the time about not changing my 17 – when I’m getting the effort I’m getting and I can see how close we are, I keep faith in the 17.”

Halfback Hughes scored twice for the Storm, his second an outrageous 30m try where he danced around defenders and breaking multiple tackles to score under the sticks.

Grant had scored the game’s first try bursting out of dummy-half, adding a try assist, seven tackle breaks and 75 dummy-half run metres in a commanding display.

Five-eighth Munster was also on fire with two try assists and more than 150 run metres.

Semi Valemei had finally got the Raiders a try by trucking through Papenhuyzen and diving for the line to get his side within 10 points at halftime.

Ever the perfectionist, Storm coach Craig Bellamy was spotted blasting his team during the break despite the lead.

“I just wanted to make a couple of strong points, I thought when we got to a good lead we started looking for the easy options instead of sticking to what worked,” he told reporters.

“We’re really happy to come away with with the points here … I was probably a little bit disappointed in the second half, which I imagine Ricky would be the same.

“There just seemed to be a lot of mistakes in the second half and the game was slow as.”

Papenhuyzen, who has previously battled lingering concussion symptoms, was taken from the field with a head injury before being cleared to return later in the game.

“I think it was a big step for him actually, to go back out there in the second half, he needs to do that at some stage,” Bellamy said.

“We don’t want him going out there if he is affected, or the medical staff are saying no, but he got the all clear.”